To buy "Stars in the Ring: Jewish Champions in the Golden Age of Boxing" click on the picture of the book cover, will take you to Amazon.com site.  Or buy directly from publisher: www.Rowman.com 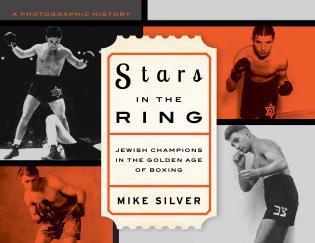 The quality and expanse of this impressive surey make it an achievement unlikely to be equaled.--Publisher's Weekly

"STARS IN THE RING: JEWISH CHAMPIONS IN THE GOLDEN AGE OF BOXING: A PHOTOGRAPHIC HISTORY"
(Lyons Press, 2016)

The first fully illustrated encyclopedic compendium of its kind, featuring biographies of some 170 prominent Jewish boxers and much more.
Date of publication: March 4, 2016
Hardcover 366 pages; 255 photos; $29.95

"Combines exhaustive research with vignettes that neither rabbinical students nor students of sports history will easily forget. Silver is both master boxing historian and a clear-thinking pragmatist. Someone ought to hand him a ram's horn and get him to a mountaintop." --Springs Toledo, author of Murderer's Row: In Search of Boxing's Greatest Outcasts

"Excellent...an elegant piece of bookmaking that is an outstanding specimen of a coffee-table book but also much more than that." --Joseph Epstein, author of Charm: The Elusive Enchantment

"The history, the drama, the reason - Silver has written a definitive study of a fascinating sociological phenomenon." --Haaretz.com

"The stories are rich and deep and take the reader back to a world that no longer exists, in or out of the ring. Silver helps to resurrect fighters whose lives and careers are worthy of your time."--Newsday.com

"Stars in the Ring is a gold mine"--International Jerusalem Post

"Lots of people know boxing, but not many understand it: its spirit, its significance, its storied past and probable future. Mike Silver is one of the few. Anything he writes is essential reading for the true fan.
--David Margolick, author of Beyond Glory: Joe Louis vs. Max Schmeling, and a World on the Brink

MIKE SILVER's NEWEST BOOK!
A collection of my best articles and interviews from the past 40 years...
click on picture to connect to Amazon or purchase from publisher: www.Rowman.com 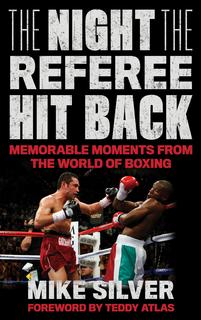 "There are those, no doubt, who feel that any criticism leveled at Mayweather or Hopkins, as well as Pernell Whitaker or Roy Jones Jr., are grounds for immediate excommunication. But discount Silver at your own peril. You may not agree with everything that he says, but his observations are a net win for a boxing culture that seems to run more and more on a perpetual feed-back loop of self-regarding hype.

..."And then there are the interviews. Archie Moore, Emile Griffith, Carlos Ortiz, Ted Lowry, and Curtis Cokes round out a section of illuminating conversations toward the end of the book. They are like the equivalent of Paris Review interviews, primary documents that preserve the wit and inflection of voices too seldom heard. For example, in his talk with heavyweight Lowry, Silver asks him to describe the punching power of Rocky Marciano, whom he came close to defeating, were it not for the judges' decision. Lowry responds with an illuminating metaphor.

"He hit hard but a smart fighter had no business getting hit by Rocky because he would send you a letter when he's gonna punch," Lowry said.

Speaking of letters, The Night the Referee Hit Back is an eminently fine one.

"Mike Silver's knowledge of boxing history is unparalleld, but what makes him so valuable to read is the insight he brings to the subject--whether he's demythologizing the Thrilla in Manila, putting Floyd Mayweather's achievements in critical perspective, or chronicling boxing's bygone golden age...The Night the Referee Hit Back is a Silver primer for the uninitiated and a treasure trove for the connoisseur. Opinionated but fair, unsentimental but compassionate, and restless in its desire to improve understanding of a misunderstood sport, Silver's work is essential for serious students of the fight game."

--Paul Beston, author of The Boxing Kings: When Heavyweights Ruled The Ring

"In this fast-paced, enjoyable collection of essays, boxing historian Silver (The Arc of Boxing) gathers the best of his articles covering four decades of  professional boxing...Along the way, Silver covers President Teddy Roosevelt's early boxing days, as well as the championship bouts of Floyd Mayweather, and includes interviews with such greats as Archie Moore, Emile Griffith, and Carlos Ortiz. Loaded with information and anecdotes, this will be a welcome addition to the libraries of boxing fans and sports pundits."

"Mike Silver is the Sugar Ray Robinson of boxing writers—smooth, smart, powerful, and tough to beat. The good news is that you can step in the ring with him and not get hurt. Read this book. It's a gem."
— Jonathan Eig, Ali: A Life

"Brilliant! Mike Silver's collection of essays and interviews in The Night the Referee Hit Back is informative and ceaselessly entertaining. He has the ear of a masterful writer, the keen eye of a critic, and the heart of an avid boxing fan. Mike Silver might be the most perceptive and skillful sportswriter of our generation."
— Colleen Aycock, author, The Magnificent Max Baer: The Life of the Heavyweight Champion and Film Star

"This new book by Mike Silver does an amazing thing—at least it did to me. It brought a tear to my eye, a lump in the pit of my stomach, and a smile in my heart. This book has so much going for it: insight, knowledge, and wit are found on every page. Silver explores fighters and the colorful lives they lead. No one writes so thoroughly and accurately about boxing than Mike Silver."
— Peter Wood, member of the New Jersey Boxing Hall of Fame and author of A Clenched Fist: The Making of a Golden Gloves Champion

"Mike Silver is among the most knowledgeable boxing historians in the world. His interviews and observations in The Night the Referee Hit Back are both compelling and stimulating. Boxing has always given us plenty to write about, and Silver is right on it."
— Steve Farhood, boxing analyst for Showtime and member of the International Boxing Hall of Fame

"Anyone who comes to me with a boxing question I reflexively redirect to Mike Silver, who to my mind is, pound for pound, the greatest authority on the subject. (And no one who's taken my advice has ever asked for a second suggestion!) This book is only further evidence of his expertise."

— David Margolick, author of Beyond Glory: Joe Louis vs. Max Schmeling, and a World on the Brink

"For decades boxing was an art. It was filled with great practitioners and an array of rogues. In this collection of essays by Mike Silver, the reader is given a rare insight to what made boxing such a popular sport while at the same time pointing out its many flaws. Like the great art critics throughout the ages, Mr. Silver has that rare ability to look at something he loves while remaining honest about its flaws. If you want to truly understand what made boxing great and why it no longer is, you can have no better guide than Mike Silver."
— Bobby Franklin, editor, BoxingOverBroadway.com

"Mike Silver has taken us on a journey through the history of boxing. He brings us inside places that no longer exist and through his writing, they suddenly come back to life. You can hear the rhythm of the speed bag and the thud, thud, thud of a heavybag. He gives a voice to the great fighters of yesteryear and compares them with the stars of today. Mike is unparalleled as a boxing historian and his work on these pages illustrates exactly why."
— Bobby Cassidy, Newsday

To order from Amazon click on picture of cover. Also can be ordered from publisher: www.McFarland.com 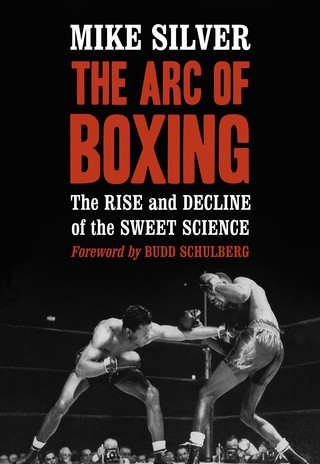 "Eye opening...argues that boxing ain't what it used to be. Argue back if you want, but not before considering Silver's opinions and the facts. The Arc of Boxing is a must read for all fight fans."

--Steve Farhood, Showtime boxing and former editor and chief of the Ring Magazine